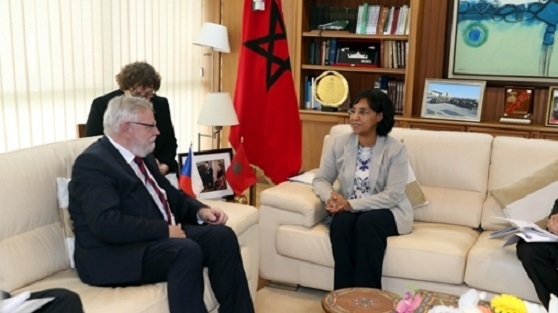 Jiri Oberfalzer, the vice-speaker of the Czech Senate, spoke to the press after a meeting with Mounia Boucetta, Morocco’s Secretary General held in Rabat on Wednesday.  He stated his belief that there could be a long-lasting political solution to what he called an  “artificial” conflict in Western Sahara and that the autonomy plan proposed by Morocco could achieve that aim.

Oberfalzer also reiterated his country’s support for the political process, led by the UN, that seeks to find a peaceful resolution to the current political situation, leading to a realistic and long lasting solution to the Western Sahara conflict.

The autonomy plan put forward by the Moroccan government in 2007 is supported by other countries including those in Africa and the European Union.  Morocco believes this plan represents the only viable solution to not only end the conflict but also to develop the West Saharan region.

In 2018, Morocco’s Foreign Affairs Minister, Nasser Bourita said that the plan will mean that Sahrawis will be able to autonomously mange their own affairs.  This will be achieved through creating legislature, judicial and executive bodies.

As well as being supporters of the plan, the Czech Republic is looking to engage in cooperative business relationships with Morocco.

Oberfalzer was optimistic that relations between the two countries are heading in the right direction, and is looking to achieve a strategic partnership with Morocco by building diplomatic relationships to boost trade.

In December 2018 the two countries signed a trade agreement in Casablanca as part of the Czech-Moroccan Business Forum, and this was followed in March with a bill passed by the Moroccan government with details of the framework for economic cooperation between Morocco and the  Czech Republic.

During this visit, Babis attended the Czech-Moroccan Business Forum and indicated that he could see the country becoming one of the Czech Republics key economic partners, commenting on their leading role in the car industry.

As the largest car manufacturer in Africa, Morocco is a key supplier of Renault and Dacia cars for the Czech Republic.

He also pointed out that Morocco remains important to the Czech car industry as an importer of around 2,400 Skoda cars each year, and that the country has hopes of reaching up to 4,000 imports to Morocco soon.