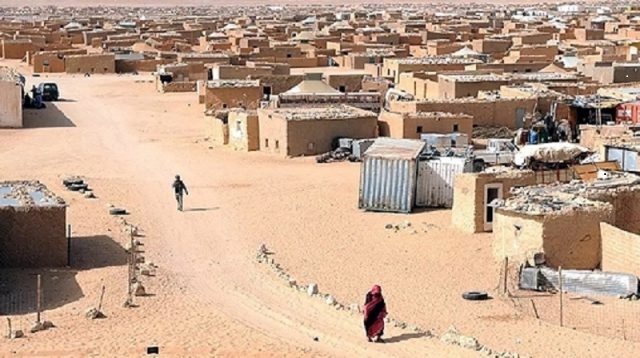 The investigative documentary “From Tindouf to Laayoune – Road to Dignity” looks at life in the Tindouf camps and the Southern Provinces and examines the living conditions there.  The documentary has been produced by Medi1TV, and will air on Sunday, 9pm (GMT+1).

The documentary was produced by the Moroccan channel Medi1TV and looks at the living conditions in the area, focusing on social conditions and the humanitarian issues surrounding the camps and the Sahrawis who live in them.  The film was first shown in Tangier on Friday, for a delegation of journalists gathered in Press House (Bayt Assahafa).

The camps, which have been the subject of human rights watchdog monitoring are off-limits to Moroccan TV channels because they are unable to get the required permissions from the Algerian officials to film there.  In order to enter the Tindouf Camps, Medi1TV reached out to Patricia Madjidid Jues, a Spanish journalist. She visited the camps; she did not have the ability to film or speak freely to those living there. However, she did state that reports made about Morocco by Polisario were not realistic.

Patricia did manage to speak with one Sahrawi living in the camps.  He was willing to tell his story but was unable to show his face fearing for his own safety.  Despite the risk of torture or death he did speak out about the reality of living conditions within the Tindouf Camps.

The Sahrawi told her that any of the humanitarian food and medical supplies did not reach the camp, instead they were taken and sold at market in Rabouni.  He spoke of routine punishment for anyone who talks to the media or human rights bodies.

In a report published in 2014 by the European Union Anti-fraud Committee (OLAF) it was confirmed that there is embezzlement of the aid destined for these camps.  The study was carried out between 2003-2007 but was only released seven years later. It states clearly that the Algerian authorities and the Polisario leadership have been embezzling the aid destined for the camps for many years.

The report indicates that because the number of occupants in the camps is overestimated the amount of aid sent is larger than needed which facilitates the diversion of aid to market.  Those donating aid have accepted figures that people on the ground have confirmed are overestimated but have not modified the provision of deliveries to reflect this.

Through tears, the man recounted his story of torture and punishment at the hands of the Polisario.  On the death of his sister and father he had reached out to the ‘Ministry of Health’. The ministry instructed him to stay silent, denying any responsibility for the deaths.  He was then taken to an unknown location and raped in retaliation for him speaking about breaches in international human rights. He told her that the government exists through the selling off of the humanitarian aid sent to the area.

The reports given by this Sahrawi mirrors those highlighted in the EU OLAF report.  The redirection and embezzlement of humanitarian aid is well organized. The aid arrives in the Port of Oran. Algeria, and shipped to Rabouni in the Tindouf camps.  Once it arrives it can be stored in the warehouses there. Reports indicate that food is swapped out – good quality food is replaced with poorer versions with the good quality items being sold.

He added that if Western Sahara became independentit is likely that Algeria will simply expand into the area. According to the journalist the impression given by the Sahrawi people is that in Tindouf everything is normal, however, there was always a look of  “fear” in their eyes.

Hospitals in the area are experiencings a serious lack of medical supplies and equipment, there is a high child mortality rate although this is denied by the  Polisario. However, when the journalist contacted a former judge Ahmine Ahmadou, they confirmed the statements made by the Sahrawi living in the camp.

The journalist spoke of her surprise when arriving in Laayoune and seeing a Mcdonalds there, because it does not open in conflict zones.

While in Laayoune, Patricia met with Sahrawi women and visited some of the multiple socio-economic projects. She also took the opportunity to meet with city officials including the municipal president.

Laayoune was a real contrast to the experience in Tindouf. Here the women seemed to enjoy rights, had opportunities for work, and Patricia did not feel the same fear of walking around the area.

She visited the library in Laayoune – the second largest in Morocco – and found it to be modern and well equipped.  In the regional hospital based in the city patients holding the government’s insurance card (RAMED) are treated free of charge.  There is a de-salination station, wind turbines, solar energy and supermarkets all active here.

One aim of the documentary was to disprove the allegation that Morocco is exploiting the territory.  The Polisario often accuses the state of exploiting natural resources. However the production of phosphate in Laayoune represents just 2% of Morocco’s total production and the net profit of this production funds the socio-economic projects in the Laayoune-Sakia El Hamra region.