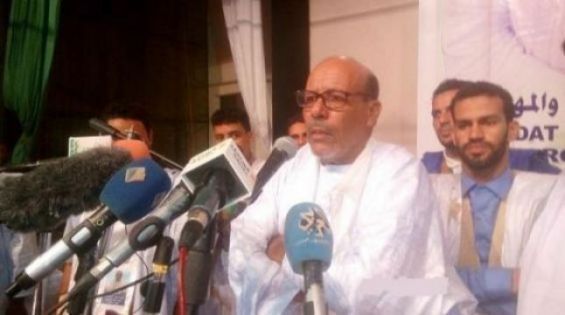 Ahmed Ould lyahi announced his intention to stand in Mauritania’s Presidential Election, scheduled for 22 June, at an event in Nouakchott.  Speaking at a Youth House, the APP (People’s Progressive Party) leader committed that, if elected, he would find a political solution to the conflict in Western Sahara; one that would be satisfactory for all parties involved.

Mauritania was present at the UN-sponsored round-table discussions that were held in Geneva, alongside Moroccan, Algerian and Polisario representatives.

Palestinian journalist, Abdel Bari Atwan interviewed the incumbent Mauritanian President.   Mohamed Ould Abdel Aziz spoke of how some of the powerful countries within the UN are now very much in favor of Morocco’s proposed solution to the Western Sahara conflict.  Perhaps more so that those looking to broker a settlement would care to accept.

In the interview Aziz stated that the EU and the US – the West – are not in favor of a new state that separates Morocco from Mauritania.  He insisted that whatever one may hear that does not support this framework will not be correct.

Abdel Aziz will not be running for re-election again this year, instead he wants to leave the field clear for a new member of the Union for the Republic (UPR) party to take the lead.   The current prediction from The Economist’s Intelligence Unit is that the anti-slavery campaigner Biram Ould Dah Ould Abeid, will win. He is also standing as a candidate for the UPR.