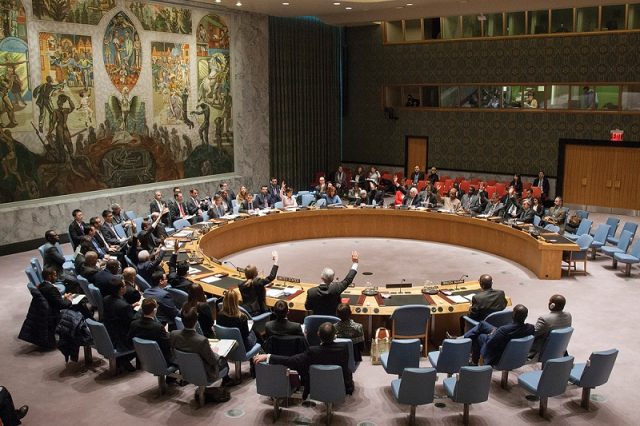 A vote on a resolution designed to extend MINURSO’s peacekeeping mission in Western Sahara has been postponed, moving from Monday 29th to Tuesday 30th April.

It is likely that the duration of the Mandate will be extended until 31st October; a total of six months.  This reduction has come about as a result of US demands, believing that shortening the timescale will put pressure on the parties to resolve the conflict and kick start the political process.

The US also proposed an alternative Special Political Mission which would end MINURSO’s mandate in the region.  However this did not find an echo within the Security Council.  The US National Security Adviser, John Bolton, has been a strong critic of MINURSO in the past.

The draft, other than reducing the timescale of MINURSO’s input in the region, contains nothing that would be hostile to Morocco.

It was expected that Russia would abstain because the wording of the operative section of the resolution excluded any reference to a need for a political solution leading to self-determination for the people of the region.

Russia had also abstained in the vote for Resolutions 2414 and 2440, both adopted in 2018, despite these resolutions having contained language pertaining to self-determination.  In doing so they broke a long tradition of consensus on the issue.  The likelihood that they will abstain again is high.

It seems that Russia may be joined by China, who also abstained on the previous resolutions and by South Africa who has consistently supported Polisario in the dispute.

Recent reports have stated that the US, who is the pen holder on these Western Sahara resolutions, were looking to have MINURSO monitor human rights in the area.  However, this was merely a hoax.  The issue of human rights has never been raised in any of the drafts circulation either to the Security Council or to the Group of Friends for Western Sahara, a body comprised of the US, UK, France, Spain and Russia.

The UN Secretary-General Antonio Guterres gave his annual report on the crisis in Western Sahara.  He called on the Polisario Front to cease violations of Morocco’s eastern defence wall.  In addition, he called on their leadership to cease insisting that the meetings with MINURSO must happen in these so-called “Liberated Zones” based east of Morocco’s defence wall, stating that the meetings should be help in Rabouni, Algeria. Highlighting Polisario’s military exercises, again within the restricted zone, he pointed out the risk of creating major tensions across the region and asked that they be stopped.