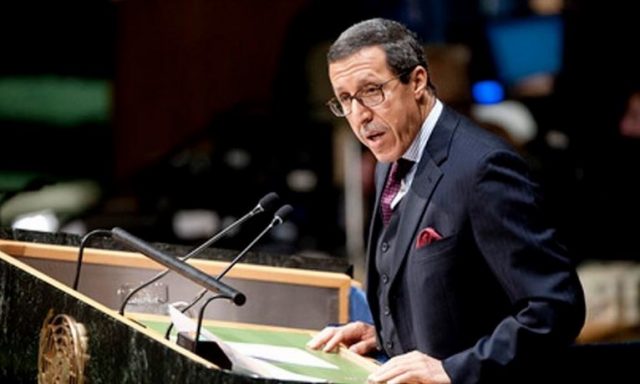 Omar Hilale, the Permanent Ambassador of Morocco to the United Nations has revealed the extent to which Algeria went to create and sustain the ongoing Western Sahara conflict.  Hilale, who was a participant at the Carribean Regional Seminar of the UN Special Committee on Decolonization, frowned at the feigned ignorance of Algeria on its responsibility in starting the regional conflict.

According to Hilale, Algeria created the Polisario front, and at the same time offer it “practically an extra sovereign territory in the Tindouf camps – the only camps in the world that are managed by a non-state entity.”  Another shocking revelation made by Hilale is Algeria’s role in the provision of arms to the separatist front, while spearheading “diplomatic campaigns” against the territorial togetherness of Morocco.

Buttressing his point, Hilale added, “It is also Algeria which pays Independent Diplomat – a lobbyist group – to write notes, make campaigns for Polisario, and send tweets. Now, Algeria takes part in the round tables. It is quite normal that Algeria, the source of this dispute, remains until its end.”

You will recall that the UN-spnsored roundtables were held in Switzerland in December 2018 and March 2019, with Algeria taking part in both.  There were several calls during the meetings, particularly Horst Kohler, the Personal Envoy for UN Secretary-General urging all the aggrieved parties to allow constructive discussions and be open to compromises that will ensure the success of the UN-led political process.

The latest UN Resolution 2468 further highlighted the role of Algeria in the situation by identifying the country as a primary party to the conflict, contrary to its expected role of a neighboring state to the regional conflict.  Over time, Algeria has denied its role in the conflict by using the language of the Security Council resolution.  Rather than a main party, Algeria preferred to be seen and treated as an observer in the dispute.

The Resolution 2468, however, addressed Algeria along with all other parties as the primary parties to the conflict, while underlying how crucial they are in the quest to find a lasting settlement.  The resolution urges all the mentioned parties to be collaborate and work towards an acceptable political solution.

Omar Hilale also set the records straight on the history of the dispute, by stressing that the conflict never started in 1963 or 1975, but instead deep-rooted in Morocco’s identity and history.  Likewise, he emphasized the age-long ownership of the disputed territory, even before the colonization of the region in late 19th century by Spain.

According to Hilale, the region was never a “terra nullius but rather a part of the national territory of Morocco.  This was confirmed by the advisory opinion of the International Court of Justice in 1975, which recognized the existence of ties of allegiance of the populations of the Sahara to the Kings of Morocco and the authority of the Moroccan Sovereigns over this region.”