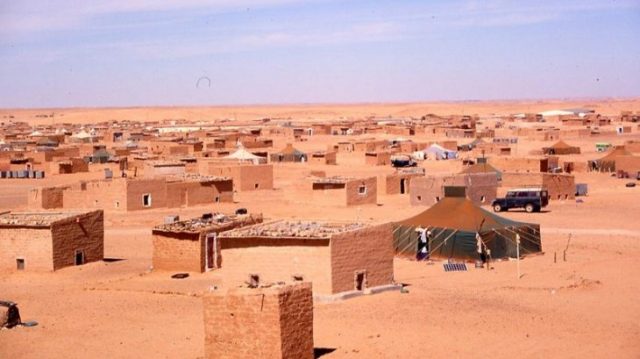 The young Sahwari was attempting to leave the camp with four friends.  After attempting to avoid the Polisario’s roadblocks placed to prevent people exiting the camps, the car broke down leaving them stranded in the desert.

The Moroccan news outlet Le360 reports that they friends split up and walked in different directions to try to find help.  After a few days the three friends were found but sadly Dih had died of thirst. The roadblocks, designed to prevent people leaving the camps have been set up by Polisario in an attempt to support the restrictions on free movement imposed by Algeria.

There have been increased restrictions following the Hirak protests that took place in Algiers at the beginning of 2018.

It is suggested that the reason Algeria are tightening the restrictions on movement in the area are twofold:  First is their fear that weapons will travel from the camp to the rest of Algeria, with potential implications for the already tense political situation.  Others believe they are simply trying to prevent an influx of large numbers of Sahrawis into Southern Morocco and taking residence in the Western Sahara province there, thus undermining Algerian claims in the region.

For those in the camps the restrictions continue to impact on day to day life.  In early April 2019, the Moroccan TV Channel Medi1TV filmed a documentary in the area to look at the lives of Sahrawis living in the Tindouf camps.

During the filming allegations were made by a refugee that the residents of the camps never received any of the medicines, food or other humanitarian aid send for them.  He alleged that this is all taken by Polisario members and sold at market in Rabouni.

There have been several protests over the last month with Sahrawis demonstrating against restrictions on movement, calling it ‘forced detentions’.  Sixty residents of the Lahmada camp protested by sitting in outside the Ministry of the Interior, Rabouni, on 23rd April 2019.

On 27th April tanks were used by Polisario in order to remove 30 young Sahrawis from blocking the main road into the Rabouni camp where they were protesting the lack of free movement.