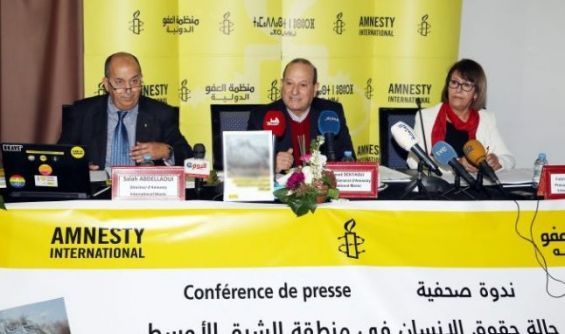 The Moroccan authorities reject the allegations made by Amnesty International and ask them to provide evidence to support those allegations.

The Moroccan public authorities have completely rejected the allegations made in Amnesty International’s latest report, and demanded evidence for its contents.

The statement made by the authorities stressed that the Moroccan authorities have denied that any contact was made with them by Amnesty International, insisting that the publication of the report and the accompanying mobilization of 17 media platforms across the world to promote accusations against the institution is part of a wider agenda targeting Morocco. Part of this agenda is linked to hatred against The Kingdom, while the other part is related to competition between economic groups that market equipment used in intelligence.

The statement further emphasized that during this meeting, the Executive Director of Amnesty International was informed that the aforementioned report did not provide any material evidence that proves the alleged relationship of Morocco to the hacking of individuals’ phones. This suggests that this evidence simply does not exist. The Moroccan authorities have been convinced of this since the previous Amnesty International report was published in October 2019.

Moroccan authorities have said that, pending receipt of a detailed official answer and after several years of suspended cooperation with Amnesty International, they have unfortunately noticed no new developments in the organization’s approach, apart from the incidents that contradict the rules of commitment to defending human rights in its cosmic dimension away from the power of lobbies and positions of influence not related to the protection of these rights.

Thanks for subscribing! Please check your inbox for a confirmation email.