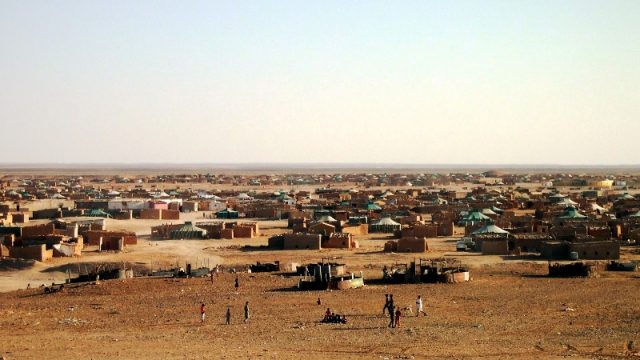 At the Pan-African Parliament Morocco has called for a census to take place in the Tindouf Camps.  The meeting, held on May 13th,  Johannesburg, South Africa, saw Morocco’s delegation claim that the continuing decades-long impasse in the Western Sahara is a direct result of Algeria’s political game-playing.

The delegates drew the Parliament’s attention to the worsening humanitarian crisis experienced by residents of the Tindouf camps, accusing the Polisario Front of mismanaging humanitarian funds and aid entering the region, with Algeria having some culpability in this.

The Moroccan delegates proposal for a census was reported by the Arabic outlet Al Ahdath Al Maghribia.  There was a confrontational discussion between both sides as Morocco accused Algeria and the Polisario of a military occupation of the area, and attempts at colonization.

Algeria’s stance has traditionally been one of self-determination for the region, but Morocco insists that Algeria must accept its role in both perpetuating and escalating conflict in the region.

As well as pointing out Algeria’s involvement in the conflict the delegates also implicated the country in the worsening human rights conditions in the area, including acts of serious human rights violations.

The parliament heard how the population of the camp was suffering from serious abuses including arrests and torture.  People had been disappearing and there were instances where tanks had been used to disperse legitimate protests.

The Moroccan MPs argued that not only is the Algerian government supporting the Polisario Front in its actions against protesters, but that it has aided the leadership to embezzle large amounts of aid destined for refugees in the area.

They alleged that both Algeria and Polisario have taken to using the Tindouf population for their own ends, ie, to further their own political goals.

In the face of such a confrontational statement, the Algerian representatives responded with their own attacks on Morocco.  They accused Rabat of trying to deflect international attention from the real issues in the area.   The FLN (National Liberation Front) Representative on the Algerian National Assembly accused Morocco of opposing self-determination in Western Sahara.

However, this spurred the Moroccan representatives to highlight what they called the lies told by Algiers when debating the Western Saharan settlements.  Algeria consistently opposes a census in the area and, contrary to rumors disseminated by Algiers and the Polisario, Morocco has consistently supported any proposals that could lead to a permanent solution for the region.  This included a referendum.

He explained that Rabat’s stance was that unless they established a political base by carrying out a census in Tindouf, then the referendum would be doomed to fail.

Although Moroccan delegates were passionate in favor of a census in Tindouf at the Pan-African parliament it seems doubtful that the move will be supported by their diplomats, at least in the foreseeable future.

There has been a gradual shift in thinking on the Western Saharan issue with the international community determined to bring an end to the dispute.

The UN recently discussed potential solutions for the area and increasingly the need for compromise, and political negotiations are being seen as a more viable way forward that the proposed referendum.

The possibility of a referendum on the issue of self-determination was not part of the most recent UN resolution.  The language of the resolution was of dialogue and compromise which in turn has been seen as supportive of Morocco’s proposals, seeing negotiation as appropriate, with separatism falling out of favor.

However, it seems that the Moroccan delegates to the Johannesburg parliament have become emboldened by the fact that the perception of Morocco as a continental leader has risen over the last 3 years.

Before January 2017 when Morocco returned to the African Union Algeria would have easily garnered support for its stance in Western Sahara.  However, since then the continent has swung more towards the Moroccan way of thinking on the issue.

One of Morocco’s greatest achievements has been to influence the AU to support the UN-led process in the area and to avoid supporting other agendas.  Rabat is becoming an increasingly important player in African politics.

Since Morocco returned to the stage and began to take a central role in African affairs it can no longer be considered anything other than an African nation.  Brahim Fassi Fihri, who plays a central role, told Morocco World News that because the country has a genuine focus on African development, it has gained more credibility which acts to prevents their position being undermined.

As Africa has become a central focus of Moroccan diplomacy it has won over many countries that were previously critical of its position on Western Sahara.