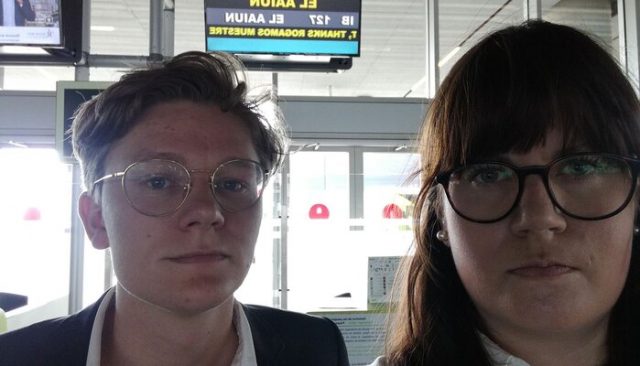 Deportation followed when entry into Layoune was denied for  two Norweigan students and five lawyers from Spain.

Vegard Fosso Smievioll and Kjersti Brevik Moller from Bergen had been sent to Layoune as observers and were to attend the trial of a human rights activist.   Nazha El Kahlidi was standing trial following charges of illegal journalism.  Amnesty Intentional, among others have been campaigning for Morocco to stop the trial and drop charges.

In the Norwegian newspaper Norway Today it was reported that the students had been denied entry to Western Sahara after travelling there to observe the trial.  This was immediately countered by Morocco who denied that the students were legitimate observers.

Morroco asserts that the usual official channels for designating an observer had not been followed.  The continue to explain that no country would have awarded the students observer status because they did not have the required competency for the rôle.

Students were sent by Rafto Foundation to ‘provoke an incident’

The Moroccan Embassy stated that the presence of the students was designed to arouse the Norwegian public by provoking an incident and that they regret that the Rafto Foundation had tried to use the students to undermine the positive measures instituted in the area by the UN.

The Embassy condemned the article in Norway Today for conflicting with all of the official UN information on Western Sahara, and for the use of deliberately inflammatory headlines which cast the Moroccan State as an occupier in the region.  In fact, the UN has said that Morocco is simply an administrative power.

The embassy also called into doubt the claims in the article that Western Sahara was rich in resources, something that has been disproved by the  US Geological Institute.

Morocco highlighted that there is an estimated 150,000 refugees in the Tindouf camps but these 2015 figures cannot be updated because Polisario will not allow UN investigators to enter the camps

Norway Today has since retracted the disputed statements.