Moroccan Ambassador’s Message to Polisario: No Place For Separatism 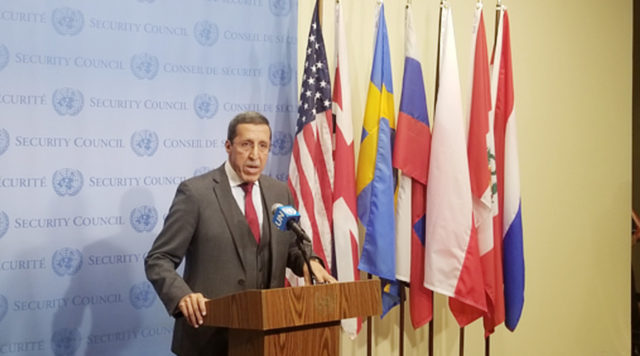 The UN permanent representative for Morocco sent a clear message to Polisario and its supporters that there is no room for separatism and they must recognise that the world has changed. Speaking at a press conference outside UN HQ in New York he reiterated the need for compromise as expressed in the recent adoption of Resolution 2468 by the UN Security Council.  The resolution adds another six months to MINURSO’s mandate of in the region.

The Ambassador urged Polisario to move forward, to accept that this is not the 1970s, that the time for rhetoric is over and it is time to move towards autonomy in the ongoing Western Sahara dispute.  Taking positions based on ideology will only serve to undermine the political process in the region.

Hilale also pointed out that in Resolution 2468 the UN Security Council was instructing Polisario to comply with previous resolutions 2414 and 2440, namely that is should respect the commitments it made to Horst Kohler, the UN Secretary-General’s personal envoy.  This includes staying out of the Guergarate buffer zone and not moving their facilities into what they have named the “liberated zones” situated east of the defence wall.

This can be seen as a warning to Polisario that the UN Security Council will not tolerate their continual violations and provocative acts which are threatening the stability of the region and undermining the political process.