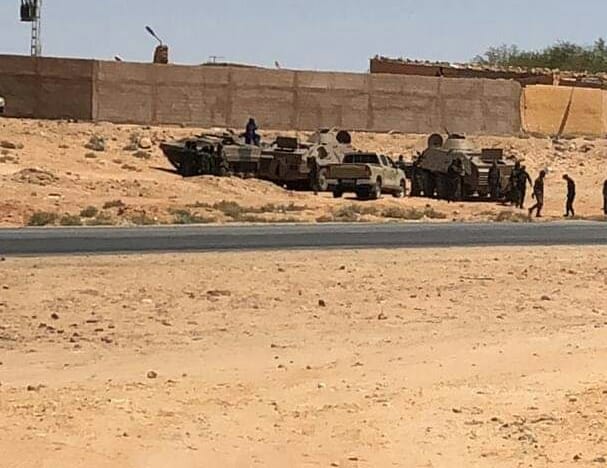 Armoured vehicles entered the Tindouf Camps to disperse Sahrawis protesting against the Polisario’s increasing restrictions in the camps.   The restrictions, including curbs on freedom of movement have led to pressure being applied on the Polisario by resident Sahawris.

Photographs appeared on Facebook, shared by Mustafa Salma Sidi Mouloud, a former Polisario officer, showing the tanks being deployed.  Their target was to remove protesters who had held a sit-in in the so-called ‘Ministry of Interior’, set up by the front in Rabouni, Algeria.

Mustafa Salma noted the irony of the Polisario first restricting free movement, only to have to use armoured vehicles to remove trucks that had not only managed to take to the roads, but bring protesters to the Ministry of Interior.

Sahawri sources spoke of violent clampdowns on the demonstrations in the camps.  Salma confirmed that protesters had been run over by the security services and had suffered serious injury.

There have been a number of protests within the Tindouf camps against Polisario’s restrictions. Sixty Sahawris protested in Rabouni in April over the conditions in the Lahmada Camp, including restricting free movement and forced detention.

Videos have appeared on YouTube showing protestors holding slogans demanding ‘freedom’ and ‘freedom of movement’.  They claim that Polisario only allows people to leave the camp once every 20 days and that cars are completely banned from leaving the area.